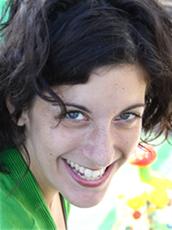 Abby Sher is a writer and performer, mama, wife, daughter, sister, lover of compost and fine naps. Her memoir, Amen, Amen, Amen: Memoir of a Girl Who Couldn’t Stop Praying was published by Scribner in October, 2009. It got a nod from Oprah and won ELLE Readers’ Prize, Chicago Tribune’s Best of 2009, and Moment Magazine’s Emerging Writers Award.

Before moving to New York, Abby wrote and performed for The Second City and ImprovOlympic. She was the voice for Elly the Talking Elephant and paid rent with one voiceover for DiGiorno’s.

Girl Who Couldn’t Stop Praying was published by Scribner in October, 2009. In addition to AMEN, AMEN, AMEN, Abby also wrote a young adult novel, KISSING SNOWFLAKES, which is about first kisses and stepmoms. Her words are in Modern Love: Tales of Love and Obsession, Behind the Bedroom Door, The New York Times, The L.A. Times, Self, Jane, Elle, Elle UK, Marie Claire, HeeB, and Redbook.

Abby also wrote a young adult novel, Kissing Snowflakes, which is about first kisses and stepmoms.

My newest essays and articles!

Comments about the Pen Parentis Fellowship:

“Thank you so much for this generous, inspired competition.”
Go to Writing Fellowship Main Page
View Past Winners