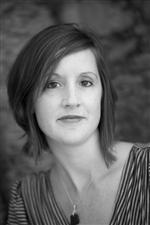 Sarah Gerkensmeyer teaches creative writing at SUNY Fredonia in Fredonia, New York, where she lives with her husband and two young sons (Simon, four years old and Charlie, one and a half). She has spent time during two consecutive winters at Ragdale and was awarded a waiter scholarship to the Bread Loaf Writers’ Conference in Vermont. She received her MFA from Cornell University in 2004. She is at work on her first novel.

Read one of her short stories in the Massachusetts Review: http://www.massreview.org/current-issue

Here is a link to a story recently published in Guernica Magazine: http://www.guernicamag.com/fiction/dear-john/

Just weeks after winning our Fellowship, Sarah’s first short story collection, “What You Are Now Enjoying,” won the 2012 Autumn House Press Fiction Contest, judged by Stewart O’Nan. It was published in February 2013 by Autumn House Press, and Sarah did a reading from it at our April 2013 Salon alongside Leigh Newman and one of Sarah’s writing idols, Kelly Link. She also attended the Vermont Studio Center and Grub Street on scholarships.

Click on this link to see the entire letter that Sarah wrote to incoming Fellow, John Jodzio.

“I had an absolute blast.  That was such a great turnout and such a beautiful space.  I’m so impressed with the organization and so excited to be involved.  Thanks again for everything.  Pen Parentis has developed such an amazing resource.  Everyone there was so warm and receptive.  And I enjoyed chatting with Frank. “
Go to Writing Fellowship Main Page
View Past Winners