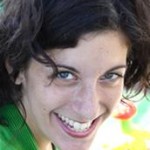 I write Short Stories, Creative Nonfiction, Memoir, Screenplays, One-Woman Shows.
Originally from somewhere, I currently live in Brooklyn. I am also a parent.

I’m a writer and performer, mama, wife, daughter, sister, lover of compost and fine naps.  I write books, screenplays, one-woman shows, fan letters, and bad raps. I perform with and without a trombone. I dream in color. It usually smells like I burned the toast.

I wrote and performed for The Second City, ImprovOlympic, HBO, NPR. Three books and lots of articles and essays.

My memoir, Amen, Amen, Amen: Memoir of a Girl Who Couldn’t Stop Praying was published by Scribner in October, 2009. It got a nod from Oprah.

Behind the Bedroom Door: Getting it, Giving it, Loving it, Missing it

The Jewish Daughter Diaries: True Stories of Being Loved Too Much by our Moms