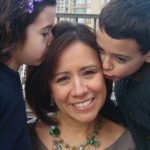 A five-time Emmy award–winning television producer, Alicia has worked at NBC’s TODAY Show since 2000.  She grew up in the northern California town of Woodland, graduated from the University of California at Davis and came to New York to work in the TV business.  She’s worked at NBC Sports, ABC’s “The View,” and for 13 years has been a producer at TODAY.  She volunteers as an Events Advisor for the Women’s Network @NBCUniversal, which focuses on women helping women in the corporate world.  Also an author, her latest book, “Sh*tty Mom:  The Parenting Guide for the Rest of Us” is a New York Times bestseller and was published by Abrams in 2012.  Look out for a follow-up, “Sh*tty Mom For All Seasons:  Half-@ssing It All Year Long,” due April 2016.  Her first book, “Today’s Moms:  Essentials for Surviving Baby’s First Year” was published by Harper Collins in 2009.  She lives in New York City with her husband and two children.

Alicia read at Pen Parentis on May 13th, 2010. Follow this link to see all the books featured in Season 3. Learn more about the author at her website.