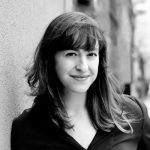 Amelia Kahaney grew up in San Diego, California, and Hilo, Hawaii. Her short fiction has appeared or is forthcoming in Best American Nonrequired Reading, One Story, Crazyhorse, and Joyland, among other publications. The Brokenhearted and The Invisible, her novels for teens, were published by HarperTeen in 2013 and 2014. The series is being translated into French, Turkish, Korean and Japanese, and has been optioned for film by New Line Cinema. Amelia lives in Brooklyn, New York, with her husband, their son, two aquatic frogs, and a semi-enchanted fire-bellied newt.

Amelia read at Pen Parentis on February 14th, 2012. Follow this link to see all the books featured in Season 7. Learn more about the author at her website.
<--- Go Back To Authors List