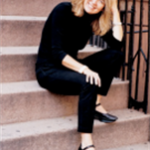 I write Short Stories, Novels, Creative Nonfiction, Memoir.
Originally from West Warwick, RI, I currently live in Providence in the same state. I am also a parent.

I have wanted to be a writer for as long as I remember. My favorite books when I was a kid were Little Women and Nancy Drew. Later, I loved Marjorie Morningstar, Les Miserables and Doctor Zhivago, obviously choosing books by size!

A Rhode Island native, I was born in West Warwick and spent high school working as a Marsha Jordan Girl, modeling for the Jordan Marsh department store at the Warwick Mall. I majored in English at the University of Rhode Island, and that’s where I fell in love with Shakespeare, Willa Cather, and F. Scott Fitzgerald.

When I was in seventh grade, I read a book called How To Become An Airline Stewardess that fueled my desire to see the world. And that’s just what I did when I graduated from URI–I went to work for TWA as a flight attendant. Back then, I thought you needed adventures in order to be a writer. Of course, I know now that all you need, as Eudora Welty said, is to sit on your own front porch.

But I did see a lot of the world with TWA, and I moved from Boston to St. Louis and finally to NYC, a place I’d dreamed of living ever since I watched Doris Day movies as a little girl. I wrote my first novel, Somewhere Off the Coast of Maine, on international flights and on the Train to the Plane, which was the subway out to JFK. It was published in 1987. Since then, I’ve published in The New York Times, The Paris Review, O, Bon Appetit, Tin House, The Atlantic Monthly, Real Simple, and other wonderful places; and I’ve won two Pushcart Prizes, two Best American Food Writing Awards, Best American Spiritual Writing and Travel Writing Awards, and a Boston Public Library Literary Light Award.

I live in Providence, RI with my husband and our children.

Anne Hood is the author of thirteen books, including the bestsellers The Knitting Circle, The Red Thread, and Somewhere Off the Coast of Maine; the memoir Comfort: A Journey Through Grief, which was selected as a New York Times Editors’ Choice and as one of the top ten nonfiction books of 2008 by Entertainment Weekly; and the critically acclaimed short story collection An Ornithologist’s Guide to Life. She has won two Pushcart Prizes, the Paul Bowles Prize for Short Fiction, and Best American Spiritual Writing, Best American Travel Writing, and Best Food Writing Awards. Her latest novel, The Obituary Writer, was an O, The Oprah Magazine Best New Book of April 2013 and chosen as one of the Best Books of 2013 by Amazon.

You can find them listed here on her author website.