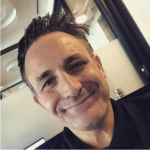 He serves as a Lecturer (and part-time faculty) at Lake Forest College. He teaches LOOP 202: Professional Development in the 21st Century and Liberal Arts and The Workplace.

Ben worked at Prevent Child Abuse America from 2007-2016, including serving as the Senior Director of Strategic Communications. While there, he introduced the organization to social media, wrote and managed grants from the CDC and Doris Duke, served as staff lead on the current strategic plan, and co-scripted the 2010 Emmy award-winning Ounce of Prevention of Florida “Prevent Child Abuse” public service campaign.

He serves as Principal, HEFT Creative Strategies, where he believes in helping human beings and organizations be their best selves through story and has consulted with a range of organizations including Leo Burnett, Content R|S, lylole, Jeff Pfaller, Inc., Human Elements, lylole, Koan, The Montana Institute and The Center for Advanced Emotional Intelligence.

He worked to support the emergence of Chicago publisher Curbside Splendor, where he played an active role in the acquisition, launch, and/or promotion of a number of acclaimed books including May We Shed These Human Bodies by Amber Sparks and Don’t Start Me Talkin’ by Tom Williams. More recently he’s been working with the ascendant Green Writers Press on promoting a series of award-winning and timely books including Finding God in Ordinary Time by Christine Eberle, Offline by Brian Adams, and The Coffeehouse Resistance by Sarina Prabasi, as well as working with independent authors such as Greg Olear and Hosho McCreesh on Dirty Rubles and Chinese Gucci respectively.

Ben produces and hosts This Podcast Will Change Your Life, which was launched in February 2010, focusing on authors and changemakers from around the country and the world, and was named by Elephant Journal as one of “The 10 Best Podcasts to Help you Change your Life.” He also produces and co-host The Blank Slate Podcast with Sam Tanios, which focuses on small businesses owners, the pandemic, being nimble and engaging in a dialog about what’s possible now, where to find hope and what can be accomplished if we work together.

And he helps people tell their stories.

Ben read at Pen Parentis on April 8th, 2014. Follow this link to see all the books featured in Season 11. Learn more about the author at his website.