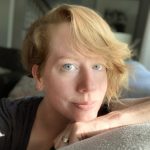 Betsy Golden Kellem is a historian and Fortune 5 media attorney. A scholar of the unusual, her history writing has appeared in The Atlantic, Vanity Fair, The Washington Post, Smithsonian, Atlas Obscura, Slate, and Narratively. Betsy serves on the board of directors of the Barnum Museum in Bridgeport, Connecticut, hangs out with a lot of circus folks, nerds and weirdos, and has taught classes at Yale and the University of Connecticut School of Law. She blogs at her history site Drinks With Dead People, an ongoing effort to answer the old party question: if you could have a drink with anyone in history, who would it be? Betsy lives in greater New Haven, Connecticut, with her husband, daughter and a flatulent English bulldog named after Walter Matthau. She visits libraries as therapy, and her best friends have been dead for a very long time.