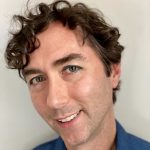 Brian Gresko (he/they) is a writer based in Brooklyn, and the editor of the anthology When I First Held You: 22 Critically Acclaimed Writers Talk About the Triumphs, Challenges, and Transformative Experience of Fatherhood. He identifies as white and gender noncomforming. His work has appeared in Longreads, The Literary Hub, The Atlantic, The Rumpus, the L.A. Review of Books, and Poets & Writers magazine, among numerous other publications. He co-runs the esteemed Pete’s Reading Series, and during the 2020 quarantine hosted The Antibody, an online reading and conversation series. He currently teaches for Jericho Writers and Catapult, and has previously led workshops and classes for the Sackett Street Writing Workshops, The Center for Fiction, and the New York Public Library. Brian received his MFA in Creative Writing from The New School, and graduated from Oberlin College as a first-generation college student with a self-designed, cross-disciplinary major entitled “Narrativity in Film.”

Brian read at Pen Parentis on June 19th, 2014. Learn more about the author at their website.