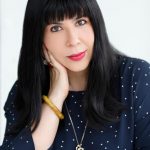 Carrie Rosten was born and raised in Hollywood to a Chinese-American mother and a Jewish-WASP father. She began her career as a wardrobe stylist in Los Angeles and then worked at several publications in New York including W, BlackBook, OUT, and at BULLETT, where she was the Publisher and Chief Brand Officer. Independent publishing, however, is her true calling and writing runs in her colorful family. Like her titular characters, Carrie loves to challenge rules that don’t make sense, asks lots of questions and believes in the transformative power of words and imagination. Her first novel, “Chloe Leiberman (Sometimes Wong)” was published by Random House in 2005.  In 2012, Carrie self-published a children’s e-book, “Soma So Strange,” which will be printed this Fall.  She recently launched an editorial project called TBD Mama, a bi-weekly newsletter focused on Mom-adjacent topics that will grow into a larger network for moms returning to work.
While she would like to live part-time in Mexico, especially come wInter, Carrie resides in Chelsea with her husband, Kamuti, and 3-year old son, Karuna.
<--- Go Back To Authors List