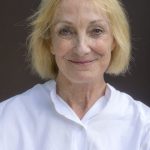 Christine Schutt is the author of three short story collections, Nightwork; A Day, a Night, Another Day, Summer; and most recently, Pure Hollywood. Her first novel, Florida, was a National Book Award finalist; her second novel, All Souls, a finalist for the 2009 Pulitzer Prize.  A third novel, Prosperous Friends, was noted in The New Yorker as one of the best books of 2012.  Her stories have appeared in NOON, Granta, Harper’s, Oxford American, Fence, and other publications.

Schutt has been the recipient of a Guggenheim Fellowship and New York Foundation of the Arts grant.  She has twice won the O.Henry Short Story Prize, and her stories have been anthologized.

Schutt has taught in many MFA programs as a visiting writer, among them Washington University, Syracuse University, and UC Irvine. Most recently, she was the Tin House Visiting Writer at Portland State University-Oregon in spring 2017.  She frequently teaches at the Sewanee Writers’ Conference in the summer. Schutt lives in New York and is a frequent adjunct at Columbia University.

Born and raised in a small town, halfway between Madison and Milwaukee, Wisconsin, Christine Schutt earned her BA and MA degrees at the University of Wisconsin in Madison.  Not long after, she moved to New York, where she has lived ever since.  She has an MFA in fiction from Columbia University.  Her first teacher in the program was Richard Yates.

Schutt spends her summers in Maine with her husband, a master gardener, who has made a locally famous perennial garden.  Schutt is the master dead-header. She has a dog, two cats, two grown sons, two daughters-in-law, and two granddaughters.

Christine read at Pen Parentis on May 8th, 2012. Follow this link to see all the books featured in Season 7. Learn more about the author at her website.