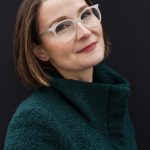 Eleanor Henderson grew up in Florida and attended Middlebury College and the University of Virginia, where she earned her MFA. She is the author of two novels: The Twelve-Mile Straight (Ecco, 2017) and Ten Thousand Saints (Ecco, 2011), which was named one of the 10 Best Books of the Year by The New York Times and a finalist for the Award for First Fiction from The Los Angeles Times. Her stories and essays have appeared in publications including Agni, Ninth Letter, The New York Times, The Wall Street Journal, Poets & Writers, The Virginia Quarterly Review, and The Best American Short Stories. With Anna Solomon she is also co-editor of Labor Day: True Birth Stories by Today’s Best Women Writers (FSG, 2014). Her memoir Everything I Have Is Yours will be published by Flatiron Books on August 10, 2021. The Chair of the Writing Department and the Robert Ryan Professor in the Humanities at Ithaca College, she lives in Ithaca, New York, with her husband and two sons.

Eleanor read at Pen Parentis on March 12th, 2012. Follow this link to see all the books featured in Season 7. Learn more about the author at her website.