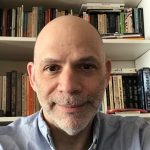 Gordon Haber is a writer, editor, and teacher. His short fiction has appeared in various journals and as three best-selling Kindle Singles. His nonfiction writing on religion and culture has appeared in newspapers and magazines like the Forward, Religion Dispatches, and Religion and Politics. He also runs Dutch Kills Press, a micro-press that combines the editorial excellence of traditional publishing with the flexibility of e-books. He does not live in Brooklyn.
Anthology now available:
2020: Good Writing from a Bad Year
<--- Go Back To Authors List