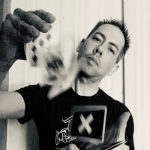 Jack Miller lives and writes near Boston, where he sword-fights with his daughter and dates a rock star. Though he is uncertain what an MFA is and is pretty sure “academia” is a kind of tropical nut, his poetry has appeared in several print journals, including Sugar House Review, RHINO, and Conclave: A Journal of Character. Recently he won the second place Vallum Award for Poetry, nearly two decades after winning the second place Robert Boit Manuscript Prize. This is the first time he’s ever taken first place for anything, so he may consequently spend the prize money on a tiara. If he does, photos will surface at jack-miller.org.

Jack read at Pen Parentis on November 11th, 2014. Follow this link to see all the books featured in Season 12. Learn more about the author at his website.