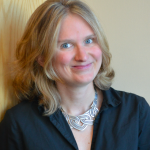 Jess deCourcy Hinds is nursing a baby while writing this bio. Jess was the 2014-15 Writing Fellow with Pen Parentis. In 2017, she won second place in the Stella Kupferberg Memorial Short Story Prize judged by Lauren Groff and sponsored by Electric Literature and Symphony Space. In 2015, she was a finalist in the Barbara Deming Memorial Fund competition. Her writing has appeared in Quarterly West, The Rumpus, LitHub, Ms. magazine, Newsweek, The New York Times, Reuters.com, Seventeen, School Library Journal and Brain, Child: The Magazine for Thinking Mothers. Jess is proud to have read her fiction twice at Pen Parentis salons. She also read with Quarterly West at AWP in Tampa, FL, in 2017. Most of these credits, and in fact all of the fiction credits (which are closest to her heart), were earned after having children.
She and her husband, an architect, are raising two daughters (a 7 year-old and an infant) in Queens, NY.
For the past decade, Jess has served as the founding library director of Bard High School Early College Queens in Long Island City. There she runs a popular author series (learn more in Lit Hub), teaches contemporary literature and creative writing, and writes grants. Along with the amazing students in her library, who rebel against the patriarchal, racist and homophobic Dewey Decimal system, Jess has been featured on NPR.
Also, Jess spent a very long time in school. She began at Bard College at Simon’s Rock, a sister campus of the school where she now works. Then Jess went to Smith in search of Sylvia Plath (not the most uplifting parent writer role-model!). Later, she earned an M.F.A. from Brooklyn College with Michael Cunningham, and an M.L.S. in library science from The Pratt Institute.

The salons, daytime meet-ups and online groups are medicine, vaccinations inoculating you from despair and lethargy. They are food to nourish your writing. So…no excuses, OK?! See you there.
<--- Go Back To Authors List