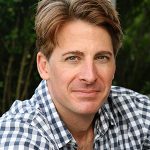 JOHN BURNHAM SCHWARTZ is the bestselling author of six novels, including The Red Daughter, The Commoner, and Reservation Road, which was made into a film based on his screenplay. His books have been translated into twenty languages, and he has done extensive screen and television writing for the major Hollywood studios, including as screenwriter of HBO Films’ The Wizard of Lies starring Robert De Niro and Michelle Pfeiffer, for which he was nominated for a 2018 Writers Guild of America Award for Outstanding Writing. The longtime Literary Director of the Sun Valley Writers’ Conference, Schwartz is also host and co-producer of the literary podcast Beyond the Page: The Best of the Sun Valley Writers’ Conference. He lives in Brooklyn, NY and Salisbury, CT with his wife, screenwriter and food writer Aleksandra Crapanzano, and their son Garrick.

John read at Pen Parentis in on December 13th, 2011. Follow this link to see all the books featured in Season 6. Learn more about the author at his website.