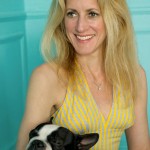 I write Creative Nonfiction, Memoir, Other.
Originally from Bedford, NY, I currently live in Manhattan. I am also a parent.

Julie Klam grew up in Bedford, New York. After interning for Late Night with David Letterman, she went on to write for such publications as O: The Oprah Magazine, Rolling Stone, Harper’s Bazaar, and The New York Times, and for the VH1 television show Pop-Up Video, where she earned an Emmy nomination. Julie Klam is the New York Times Bestselling author of Please Excuse My Daughter, You Had Me At Woof, Love at First Bark, and Friendkeeping. She lives in Manhattan with her dogs and humans and is looking forward to serving as a mentor in the Pen Parentis Cycle of Support. Get to know her better by reading the Granta Interview.