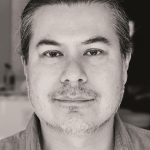 Karl Taro Greenfeld is the author of eight books, including the forthcoming novel The Subprimes, Triburbia, Boy Alone, about his autistic brother Noah, Speed Tribes, Standard Deviations and China Syndrome. A long time writer and editor for The Nation, TIME and Sports Illustrated, he was the editor of TIME Asia and was among the founding editors of Sports Illustrated China.

Karl was born in Kobe, Japan, has lived in Paris, Tokyo, Hong Kong and Los Angeles. He currently lives in Pacific Palisades with his wife, Silka, and their two daughters, Esmee and Lola.

Karl read at Pen Parentis on December 11th, 2012. Follow this link to see all the books featured in Season 8. Learn more about the author at his website.