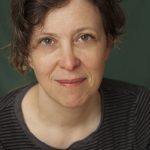 Karla Schickele is a writer, musician, and creative catalyst.

Karla founded the groundbreaking, award-winning music and mentoring program Willie Mae Rock Camp for Girls in New York City, where she served as Executive Director for more than a decade.

Karla writes creative non-fiction and fiction. She is currently working with her father, composer and musical satirist Peter Schickele, on a memoir of his musical life. She is also developing an innovative YA novel and several other fiction projects. She contributed an essay to the anthology Feminist Utopia Project (Feminist Press, 2015) and the introduction to Rock ‘n Roll Camp for Girls: How to Start a Band, Write Songs, Record an Album, and Rock Out! (Chronicle Books, 2008, with a forward by Carrie Brownstein).

A songwriter, singer, and bassist, Karla has performed and recorded widely. She toured internationally as a member of the acclaimed indie rock bands Ida and beekeeper, and has appeared as a guest player with numerous bands, including Low for the band’s first tour opening for Radiohead in Europe in 2002. Her other musical projects have included the bands K., The Naysayer, The Good Ms. Padgett, Mylo, and more.

Karla was born and raised in Brooklyn, where she now lives with her partner, photographer Kate Milford, and their children.
<--- Go Back To Authors List