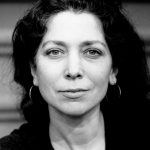 L. Annette Binder was born in Germany and immigrated to the United States as a small child. The Vanishing Sky, her first novel, is inspired by events from her family history.

Her father was required to serve in the Hitler Youth. Family lore has it he ran away from his post near the end of the war.

Annette’s father died when she was sixteen, and writing The Vanishing Sky gave her the chance to imagine the stories he didn’t get to tell her.

Annette holds a degree in Classics from Harvard, literature from Berkeley and law from Harvard Law School. She has an MFA from the Programs in Writing at the University of California, Irvine. Her story collection Rise (Sarabande 2012) received the Mary McCarthy Prize and her stories have appeared in the Pushcart Prize Anthology, the O. Henry Prize Anthology and Public Radio’s Selected Shorts. She lives in New England with her husband and daughter.

Annette read at Pen Parentis on March 12th, 2013. Follow this link to see all the books featured in Season 9. Learn more about the author at her website.