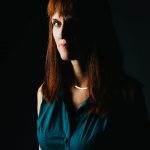 M. M. DeVoe is a Manhattan-based fiction writer who has won awards and published short fiction in nearly every genre. She holds an MFA from Columbia University where she was a Writing Fellow and where she studied under Michael Cunningham, Helen Schulman, Joyce Johnson, and thesis advisor Matthew Sharpe. She has also won multiple Manhattan Community Arts Fund Grants for her work with the Pen Parentis Literary Salons, which she started with her friend Arlaina Tibensky in 2009 as a platform for writers who are also parents. Under DeVoe’s leadership, the organization Pen Parentis, Ltd, was incorporated in 2013 as a 501c3 nonprofit to provide resources to authors who are parents to help keep them on creative track. She continues to serve as founding director, while working on a novel and raising two ingenious city-kids and their urban rabbit. She is represented by NYC agent Barbara Braun.

She is looking forward to serving as a mentor in the Pen Parentis Cycle of Support.

M. M. De Voe has won awards, mention, or been shortlisted for the following awards:

Additionally her fiction has been nominated for three Pushcart Prizes, as well as Best of the Netand Best of the Web short fiction prizes.

De Voe is also the recipient of the following fellowships and grants: