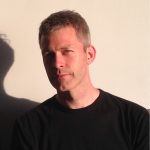 Matt Larsen is a writer, developer and artist living in Lakewood, Ohio whose loves include his brilliant wife, two charming children, science fiction, fizzy drinks and comedy, not necessarily in order.

Graduating Miami University of Ohio with a degree in Creative Writing, he lived in Chicago for nearly two decades studying improvisational comedy and performing for ComedySportz and IO Chicago with Lindbergh Babies, Space Mountain and more.

He has been published in McSweeney’s, Golden Visions, Flashshot and Kaleidotrope. Look for his app, Scorch Injector, at the Apple App Store, and his visual art at mattmakes.art or on Instagram at @mattmakes.art.