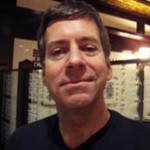 I write Novels, Plays, Other.
Originally from Brooklyn, I currently live in Manhattan. I am also a parent.

I used to say (in anticipation of my NEW YORKER profile) that I was born in Havana just before the revolution, rather than the mundane truth of being a lifelong NYC resident. When I was in high school, my first published piece (in a weekly neighborhood
paper) dealt with the firing of a popular local rabbi, and provoked calls from the synagogue’s board of directors for my head. I have been trying to provoke my audience in one way or another ever since. I graduated from Northwestern and the Columbia Journalism
School, and my pay-the-rent jobs include editor, political campaign staffer, actor, voiceover artist, stand-up comic and others too numerous to mention. Currently I’m freelancing while doing the daddy gig. I’m also cautiously optimistic about finding a publisher
for my first novel, THE CREATURE’S TALE — a satiric updating of a classic horror story (hint: it does not involve vampires, zombies or werewolves).

Reportage, essays, satires and reviews have appeared in SPY and TIKKUN magazines, the FORWARD, The READER (L.A.) and THE REAL PAPER (Boston). Play WHO’S HOT, WHO’S NOT was performed at Playwrights Horizons summer festival.