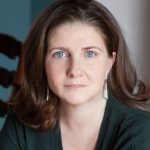 Robin Black’s story collection, If I loved you, I would tell you this, was a finalist for the Frank O’Connor International Story Prize, and named a Best Book of 2010 by numerous publications, including the Irish Times. Her novel, Life Drawing, was longlisted for the Flaherty-Dunnan First Novel Prize, the Impac Dublin Literature Prize, and the Folio Prize. Her fiction has been translated into Italian, French, German, and Dutch.

Robin’s most recent book is Crash Course: Essays From Where Writing And Life Collide. Robin’s work can be found in such publications as One Story, The New York Times Book Review, The Chicago Tribune, Southern Review, The Rumpus, O. Magazine, Conde Nast Traveler UK, and numerous anthologies, including The Best Creative Nonfiction Vol. I (Norton) and The Best of the Bellevue Literary Review. Robin lives with her husband in Philadelphia and teaches in the Rutgers-Camden MFA Program. She is also a parent.

Robin read at Pen Parentis on December 11th, 2012. Follow this link to see all the books featured in Season 8.