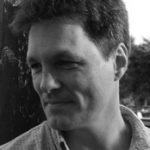 Writer-parent Roy Kesey was born and raised in northern California, currently lives in Maryland, and no longer looks anything like this picture.

His books include the short story collection Any Deadly Thing, the novel Pacazo (the January 2011 selection for The Rumpus Book Club), the collection All Over (a finalist for the Foreword Magazine Book of the Year Award, and one of The L Magazine‘s Best Books of the Decade), the novella Nothing in the World (winner of the Bullfight Media Little Book Award), and a historical guide to the city of Nanjing, China.

His translations of Pola Oloixarac’s novels Savage Theories and Dark Constellations appear courtesy of Soho Press. Other translations of his from Spanish and French into English include work on behalf of Turner Books, the Ministry of Education of Spain, PromPerú, Ferrovial Agromán, and the City of Santander.

Roy read at Pen Parentis on April 12th, 2011. Follow this link to see all the books featured in Season 5. Learn more about the author at his website.