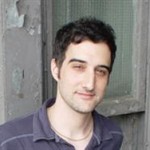 I write Creative Nonfiction, Memoir, Other.
I currently live in Brooklyn. I am also a parent.

Sam Apple, a graduate of the creative nonfiction MFA program at Columbia University, is the director of interactive media at Nerve. He has served as the editor-in-chief of New Voices Magazine and has written for The New York Times Magazine, The Financial Times Magazine, ESPN The Magazine, and Slate.com, among many other publications. His first book, Schlepping Through the Alps (Ballantine Books, 2005), was a finalist for the PEN America Award for a first work of nonfiction. In 2005, he received the annual Faux-Faulkner award. His second book, American Parent (Ballantine Books, 2009) is his latest. He lives in Brooklyn with his family.