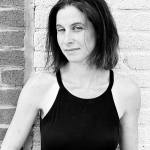 Sara received a BA from Brown and an MFA from The New School. She has written for national magazines, co-hosted the Sunday Salon, a monthly NYC reading series, and taught creative writing at Rutgers University, St. Joseph’s College and with Ditmas Writing Workshops. Her stories have been published widely in print and online, nominated for the Pushcart Prize, and included in Wigleaf‘s Top 50. A former mentor for Girls Write Now, she received a 2012 Fellowship in Fiction from the New York Foundation for the Arts. Raised outside of Philadelphia, she lives with her husband and children in Brooklyn. Her story collection, Doll Palace (originally published Dock Street Press, and long-listed for the 2015 Frank O’Connor International Short Story Award) has just been reissued by 713 Books. Her new collection, JERKS, is forthcoming from Mason Jar Press. Her debut novel, LECH, will be published by Tortoise Books in fall 2022.

Sara read at Pen Parentis on February 11th, 2014. Follow this link to see all the books featured in Season 11. Learn more about the author at her website.