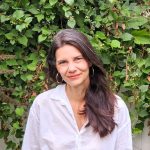 Sarah Courteau was born in the Ozark Mountains in Arkansas. One of nine children, she was raised for much of her childhood on a farm that lacked indoor plumbing and, for a period, electricity and a telephone. Among her earliest memories is watching the twitching ears on a team of horses that pulled a covered wagon her parents built to travel from Arkansas to Nebraska. She attended Yale University and earned an MFA in Nonfiction Writing at the University of Iowa. For several years she was the literary editor of the Wilson Quarterly. She lives in the Bronx with her husband and daughter.

Sarah’s fiction, essays, and book reviews have appeared in The Oxford American, Witness, The New York Times, The Washington Post, The New Republic, The Belmont Story Review, and other publications. She has received generous support from the Elizabeth George Foundation and Wildacres, participated in the Yale Writers’ Workshop, and is the 2023 Pen Parentis Writing Fellow. Currently, she is at work on a novel. Her website is sarahcourteau.com.