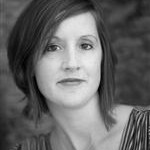 I write Short Stories.
I currently live in Fredonia, New York. I am also a parent.

Sarah Gerkensmeyer teaches creative writing at SUNY Fredonia in Fredonia, New York, where she lives with her husband and two young sons (Simon, four years old and Charlie, one and a half). She has spent time during two consecutive winters at Ragdale and was awarded a waiter scholarship to the Bread Loaf Writers’ Conference in Vermont. She received her MFA from Cornell University in 2004. She is at work on her first novel.