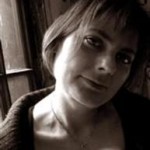 I write Short Stories, Novels, Horror.
Originally from Long Island, I currently live in Brooklyn. I am also a parent.

Sarah Langan first novel THE KEEPER (2006) was a New York Times Editor’s Pick. Her second novel THE MISSING (2007), won the Bram Stoker Award for outstanding novel, was a Publisher’s Weekly favorite book of the year, and an IHG outstanding novel nominee. Her third novel AUDREY’S DOOR, was published by HarperCollins in 2013. She also has published a dozen short stories and several essays and is working on a Master’s in Environmental Toxicology from New York University. The New York Times Book Review recently compared her to Mary Shelley. Langan lives in Brooklyn, New York with her husband, screenwriter/director/children’s book author JT Petty and their daughter and house rabbit.

She’s at work on her fourth novel, THE CLINIC, and lives in Brooklyn with her husband and young daughters. “Love Perverts” sets the scene for a post-apocalyptic series she’s been noodling around with. You can read its sequels, “Black Monday” and “Prototype” in the awesome John Joseph Adams and Hugh Howey-edited APOCALYPSE TRIPTYCH . Her most recent story, “The Old Jail” came out in THE BLUMHOUSE BOOK OF NIGHTMARES. She’s always delighted to read at Pen Parentis.